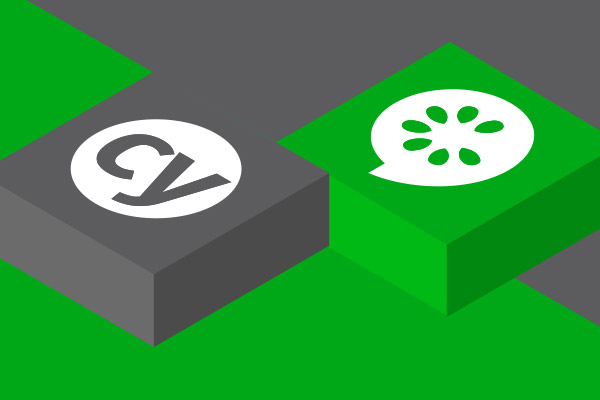 As you may know, Cypress is the de-facto front-end cross-browser test automation framework for JavaScript.

Building E2E functional testing with the Cypress framework is quite efficient, robust, and fast.

However, there are additional libraries that work very well with Cypress, like Cucumber BDD (behavior driven development).

BDD has been widely adopted over the past few years and serves as the bridge between the “three amigos,” (Business, Testing, and Developers).

With BDD and Gherkin scripting (Given, When, Then), practitioners can easily define end-user scenarios that strengthen validations and remove misunderstandings.

In addition, the adoption of BDD has been key to also bridging skillset gaps. BDD allows both business testers and SDETs/developers to contribute to higher test automation coverage.

By definition, BDD is dependent on code-based step definitions that can be used by various Gherkin scenarios.

To summarize this section, BDD helps in test automation creation with low-code scripting. It also reduces error rates in test scenarios by including more personas in the testing process.

As mentioned above, Cypress is a modern front-end test automation framework rich with capabilities to quickly create robust test scenarios.

It is open source with an active community, support, documentation, and great capabilities like Time Travel, network traffic control, Cypress commands running inside the browsers, and more.

Cypress is JavaScript base with Mocha testing framework at its core. This makes it easier for existing test automation engineers or developers who have used Selenium to ramp up with Cypress.

In addition, the framework allows running from its GUI runner, CLI, or through the cloud with solutions like Perfecto. 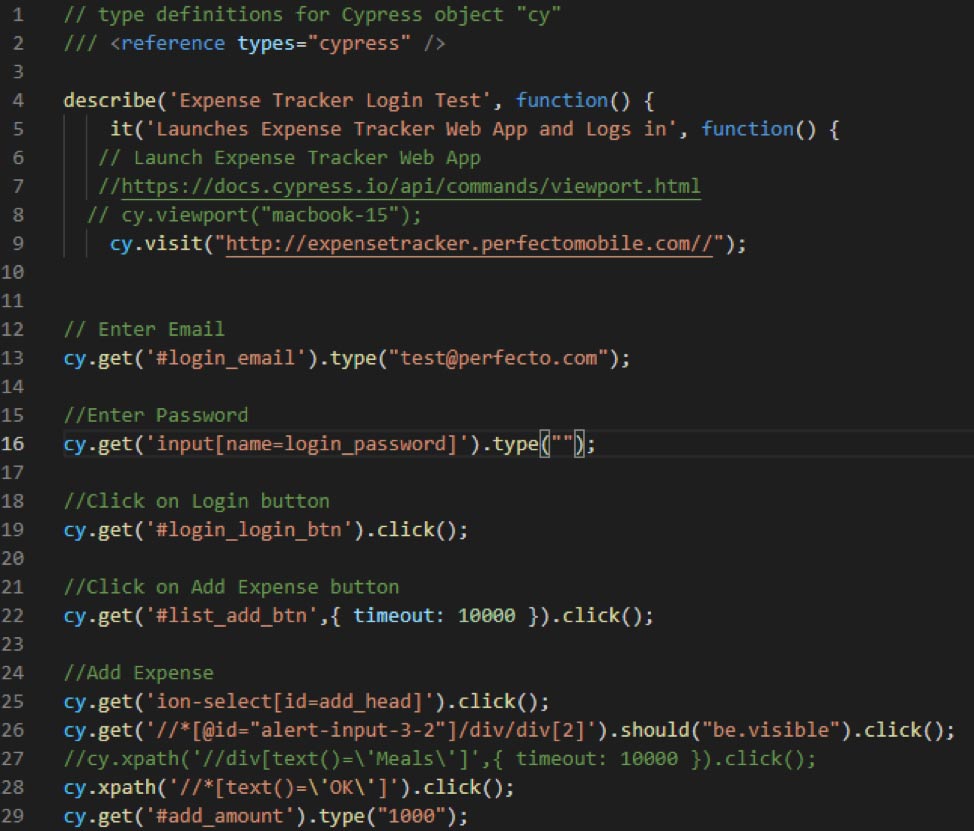 Using Cypress and Cucumber Together

To enjoy both frameworks’ benefits, teams could easily integrate BDD with Cypress and not close the technology gaps, improving the coverage of key business scenarios together with a modern JS based framework.

To do so, few things needs to be set up.

Add the relevant configurations to your Cypress environment files accordingly.
Under plugins/Index.JS file add the following:

Within the package.json file, add the following configuration:

In the spec files extension parameter in the cypress.json file, ensure to point to the feature files:

How to Run Cucumber Tests in the Perfecto Cloud

Once configured and executed, you can review your test report from within the Perfecto rich test reporting platform. 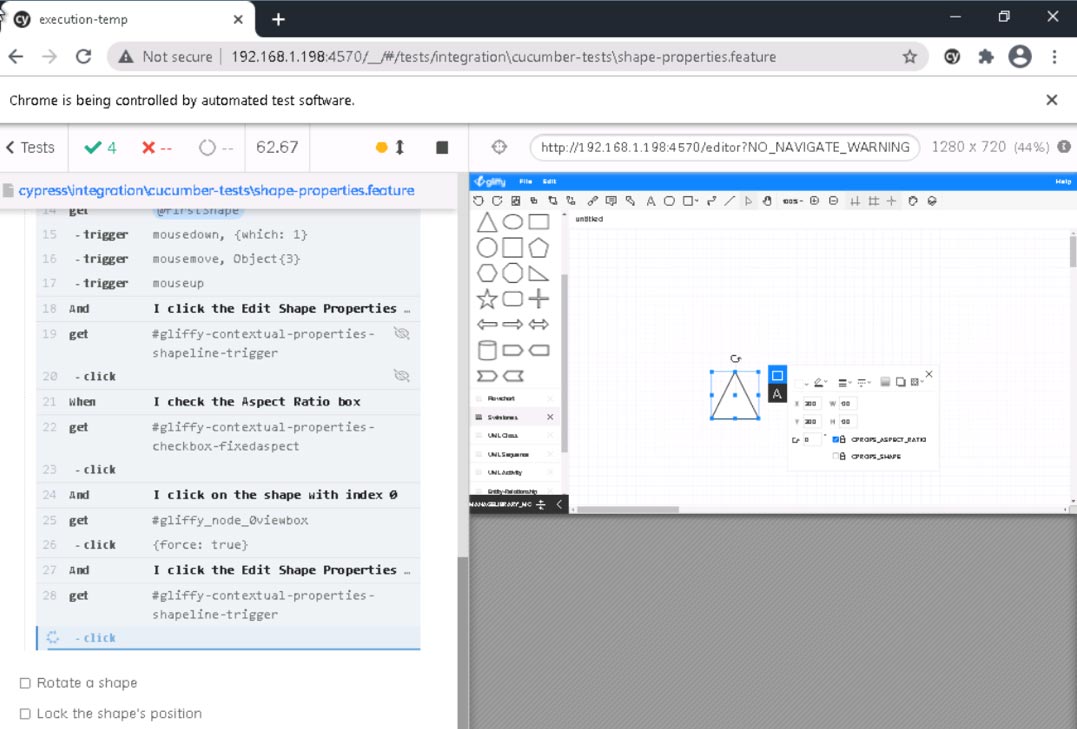 The above screenshot represents a live view of Cypress-Cucumber running a test against a web browser editor in the cloud. 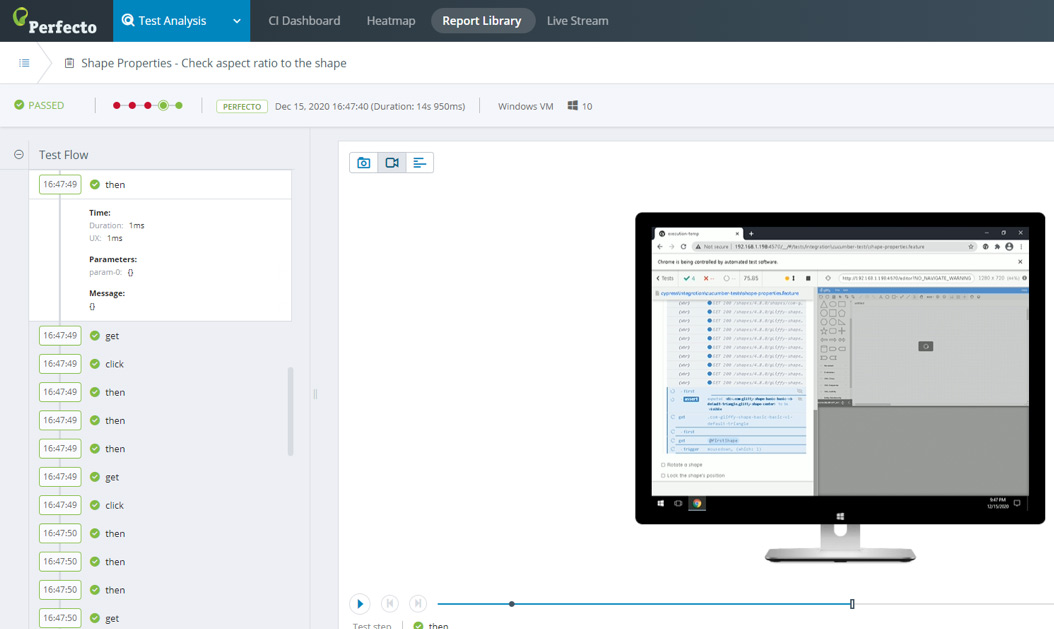 The above screenshot shows the post execution test report in the Perfecto repository. It allows you to view the step-by-step details, videos, and if taken — the screenshots as well.

As Cypress continuously matures and evolves, it is a great opportunity for BDD practitioners to explore the benefits of this framework to maximize the test coverage and simplicity of their test creation.

Cucumber and Cypress have proven to be a robust and sustainable pair.

Hence, it is a valid choice of technologies for cross-browser testers and developers.

See Cypress and Cucumber in Action With Perfecto

Perfecto supports both Cucumber and Cypress, and offers more BDD capabilities through the Quantum framework.

With Perfecto, teams have a secure, scalable cloud environment for web and mobile testing that offers fast parallel executions and fast feedback via reporting.

See it for yourself.