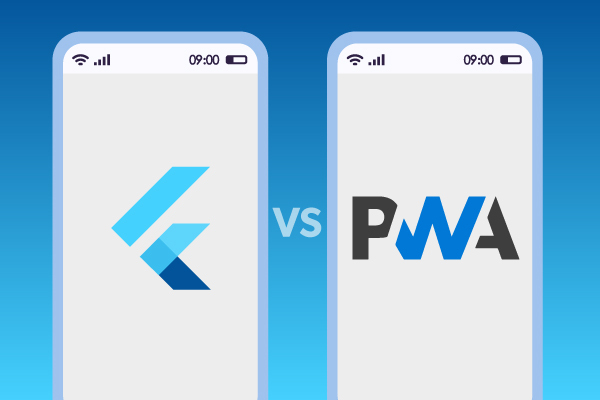 For app developers — whether web, mobile or both — the framework used throughout development is almost as important as the app itself. When considering which framework to use, comparing Flutter vs. PWA is a great place to start.

This blog will offer a breakdown of the different features of Flutter vs. PWA by highlighting their benefits and drawbacks.

Related Resources >> How to Make a Cross-Platform Test Coverage Strategy

Flutter is a free open-source UI software development kit created by Google. It is used to develop cross-platform applications for Android, iOS, Linux, Mac, Windows, Google Fuschsia, and the web from a single codebase written in DART. With a syntax like JavaScript, DART is a typed object programming language that focuses on front-end development.

The Flutter framework comes with a lot of upside for developers. Fast development and efficiency mean developers can bring their apps to life in milliseconds Stateful Hot Reload. A rich set of fully customizable widgets allows the building of native interfaces in minutes.

As the adoption of Flutter has increased since its inception in 2017, the framework has seen several tech companies leveraging its potential—including Google Ads, eBay Motors, Philips Hue, and Xianyu from Alibaba.

Progressive Web Apps (PWAs) are web applications that are regular web pages or websites, yet they appear to the user as a traditional application or native mobile application. This type of application attempts to combine features offered by most modern browsers with the benefits of a mobile experience.

The PWA framework continues to grow in popularity because it helps developers build cross-platform apps more easily than they would with native apps. They work for every user and can fit any form factor — a benefit for response time. PWAs feel like an app that a user would download onto their device yet do not require the complex installation that comes with using an app store. In addition, PWAs are secure via their HTTPS security certificate and allow search engines to find them.

A PWA app consists of several key components. Manifest.Json is the file within the PWA that describes the app, provides metadata specific to the app such as icons, splash screens, and more. Service workers are scripts that your browser runs in the background — separate from a web page — that opens the door to features that do not need a web page or user interaction.

What does all that mean for UX? Users can display and interact with push notifications, subscribe to push services, and background sync defers actions until users have a stable connection.

Because of these features, developers attribute significant improvements to PWAs, including key performance indicators like increased time on page and conversions. That success means many organizations are either shifting their current responsive web apps to a PWA framework or will be making the change soon.

Like all apps, PWAs need to be thoroughly tested—a critical step that ensures users get exceptional digital experiences. Testing PWAs for iOS and Android comes with a variety of options and differences for each. These include visual-based testing across iOS and Android, and using mobile native commands to support the PWA framework.

Differences Between Flutter vs. PWA

When it comes to testing languages, Flutter supports DART + Appium 2.0 Language Bindings such as JavaScript, Python, Java, C++, and Ruby. And while PWAs may have the upper hand in testing frameworks, Flutter does support Flutter Framework and Appium 2.0. The benefits of Flutter come in the supported platforms, which are web browsers, iOS, Android, Linux, Windows OS, Mac OS, and Google Fuchsia. It also leverages a single code base. For Flutter, there is a lot of upside — it is growing significantly in its maturity and complex testing capabilities.

On the PWA side of things, the supported languages for testing fall under the Selenium Language Bindings like JavaScript, Python, Java, C++, and Ruby. You will find the benefits of PWAs in the variety of testing frameworks they offer: Selenium, Cypress, Playwright, Puppeteer, WDIO, and Codeless. However, PWAs do fall short in supported platforms by comparison with just web browsers, iOS, and Android. Yet PWAs are already established as mature and robust in their capabilities.

When deciding which of these frameworks to use in developing cross-platform apps, it is worth considering a few things. On one hand, while Flutter offers a wide range of benefits for business folks and developers alike, it is important to note that some components are only available for iOS or Android, but not both—since Flutter comes from Google, Android developers are typically more interested in the framework than iOS developers.

On the other hand, PWAs can encounter testing challenges. The architecture is not as simple as responsive web designs, which means developers need to understand the logic behind working with service workers and managing events, states, caching, and more. Additionally, there are not many open-source or third-party integrations working with PWAs, although that number is growing.

Which One Do You Choose?

So, with all that said, should your team go with Flutter or PWAs?

Well, parsing Flutter vs. PWA all depends on which framework best suits your needs and development demands. Like all things in life, there are pros and cons for each.

Luckily for you, Perfecto knows how to maximize the potential for each. Combined with Perfecto, organizations can do high-velocity testing at scale for both Flutter applications and PWAs.

See a demo of testing PWAs and Flutter apps with Perfecto.