Get to Know Gauge, the New Cross-Browser Testing Framework

You have plenty of options for testing frameworks. There is a new cross-browser testing framework gaining adoption in the community: Gauge, a framework sponsored by ThoughtWorks. It's been attracting significant attention and gaining traction in a testing community typically dominated by Cucumber framework and Selenium.

While both Cucumber and Selenium have been around for years and are currently the preferred testing frameworks for agile teams, we are finding that more teams are adopting Gauge throughout the DevOps pipeline.

So is there room in the market for another framework? Are there benefits for a Development Manager, a Developer or a Test Engineer? How can you test across browsers with Gauge and Perfecto?

Why There is a Market for the Gauge Framework

Benefits for a Development Manager

How to use the Perfecto Cloud Platform with the Gauge Framework

Integrating Gauge with Perfecto offers testing of any browser in a cloud environment. A typical tester would struggle to have scalable access to all operating systems, browsers and browser versions used by end users. Furthermore, testers need to test beta versions of browsers as occasionally those include significant changes coming soon to production. Perfecto’s cloud offers exactly that: a variety of environments offered in enterprise-grade in clear and ready fashion, such that scalable amounts of concurrent tests can execute in a stable manner with predictable outcomes.

Integration strategy: A new class is introduced, called “Perfecto Helper”. Inside that class there’s a static RemoteWebDriver and a ReportiumClient. Those are created on the initiation of each specification. In terms of managing test status, each test class (Java) should start the test as part of the Java class constructor:

* Note that it is possible to customize the test name and add tags. it is also recommended to capture exceptions and pass those to the ReportiumClient, as below:]

PerfectoHelper represents a new driver based on the following parameters: 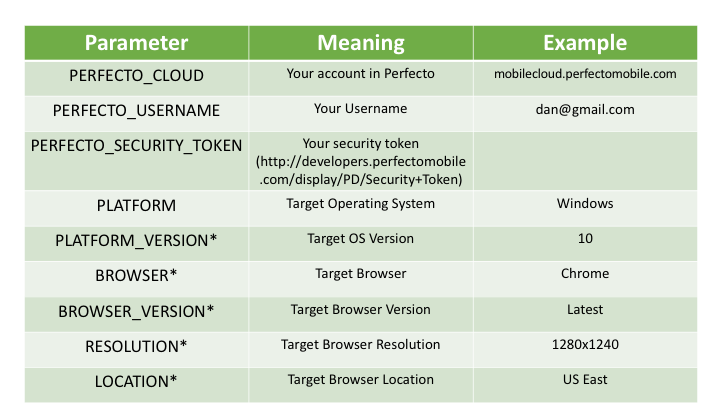 *Optional parameters. Their default value is defined in env/default/default.properties and their value is as shown in the example.

Now that you’ve run a single test, you can run two specs by selecting the folder “specs”, right click and run. Note that the tests will run serially.

Customizing the environments: Testers can override one or more of these parameters either by modifying the values in default.properties, or creating a new folder under env/<name> and adding a .properties file under it. You only need to define the parameters you want to override; the rest will use the default values. If you’re using IntelliJ, you can also define variables in Run->Edit configurations.

To execute tests using a specific configuration (also called ”environment”), go to Run->Edit configurations, in “Environment” box enter the name of the folder under env you customized.

To get started with Gauge and Perefcto, please refer to the GIT repository.

Summing It All Up

Gauge came into the testing framework community about a year ago and they continue to make a significant impact on the way teams are testing. It offers many benefits for agile teams throughout the DevOps process, including ease of use and immediate feedback.

Gauge is still relatively new, and as a result, the open source community continues to improve upon it every day. Overall, Gauge is here to stay and here at Perfecto, we are happy about it.

Learn more about Gauge and the Perfecto platform.