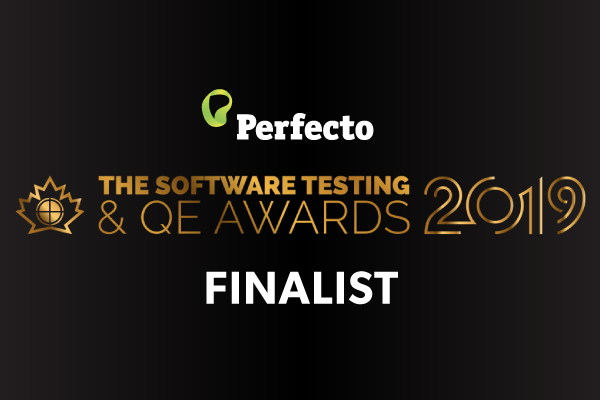 Perfecto is proud to be named a Leading Vendor finalist through both the 2019 North American Software Testing and QE Awards as well as the European Software Testing Awards. Additionally, numerous current Perfecto customers were named as finalists for other categories related to test automation.

The North American and European Software Testing & QE Awards celebrate achievements in the software testing and quality engineering market. Categories for awards include everything from mobile testing to Agile projects and testing projects by sector.

Entries are judged anonymously by seasoned software testing and QE experts. All judges are active in the field, currently holding senior management roles. The awards are open to all organizations aligned with software testing and quality engineering, no matter the size of the project or industry.

This year, one North American Perfecto customer was named a finalist for the Best Agile Project award. This award was judged on evidence of overcoming software testing/QE challenges in an Agile environment. Proven communication between stakeholders and a commitment to delivering high quality software were also criteria for this award.

Another North American Perfecto customer was named a finalist for the Best Mobile Testing Project award. This award was judged on evidence of successful techniques and best practices, overcoming project obstacles and challenges, and achievements and successful results with their mobile app testing.

A third North American Perfecto customer was named a finalist for the Best Test Automation Project award. This award was based off a demonstration of the best use of automation in a functional software testing project. The team demonstrated evidence of overcoming project challenges/obstacles as well as a commitment to industry best practices and standards.

Commonalities Among the Nominees

Not only is Perfecto proud to be nominated, but we love working with so many clients who are recognized for their achievements and great work in the testing space. Among those customers of ours who were nominated, we recognize common themes in the people, processes, and technology that enable them to accomplish amazing testing and development feats.

One common theme among these organizations is that they embrace strong collaboration. This allows them to work well as a team as they work across multiple projects, even while geographically dispersed. Support for testing needs to come not just from the top down, but also from the bottom up, with developers embracing testing and testers embracing development. Everyone on the team needs to take responsibility for his or her contributions to the software development process.

The customers of ours who were nominated for these awards all recognize the need to test like their users. They clearly define development deliverables and testing approaches, which drive the entire process. In this way, they are able to deliver quality apps without sacrificing speed.

Lastly, Perfecto was named as a finalist for the Leading Vendor award for both North America and Europe — an award that is given for top marks in product and customer service. In order to qualify for this award, Perfecto demonstrated evidence of a commitment to high quality standards, a commitment to customer satisfaction, and speed of installation. Perfecto also proved its value for the cost, as well as its position as a thought leader in the testing space.