After years running Selenium against a device farm, the team at Gliffy by Perforce migrated to Perfecto and Cypress so they could accelerate cross-browser testing at scale.

the team was able to get set up and start automating quickly. They have all the speed and simplicity that Cypress offers in combination with Perfecto’s scalable web and mobile testing platform."

Gliffy was testing their UI in a way that many modern teams do. They were using their CI to trigger functional testing, which was validated using Selenium.

But Selenium was a tough match for their application, which is an online diagram editor with many graphical elements. Scaling testing came with growing pains associated with Selenium: flakiness and false positives.

As a result, the Gliffy team wasn’t able to test as much or as quickly as they wanted. They needed a better balance of speed and quality — one that allowed them to scale testing without disrupting their existing process, frameworks, and workflows. 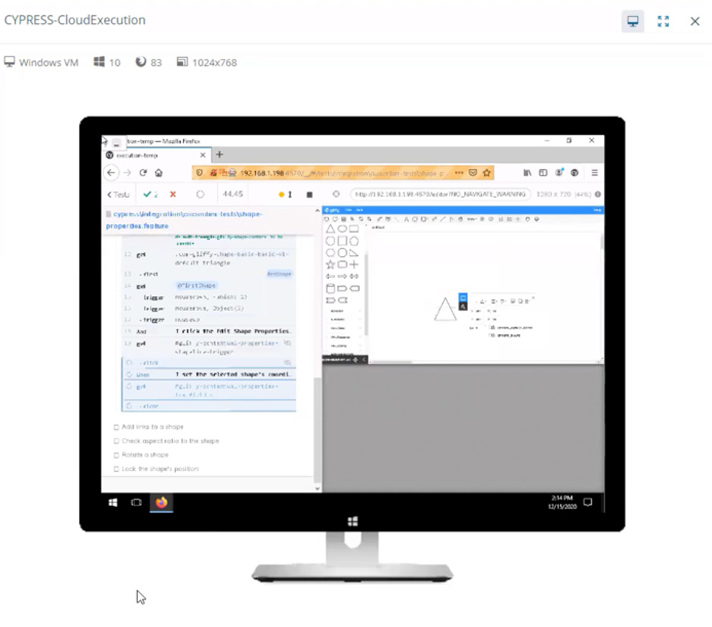 After switching to the Perfecto platform from another cloud lab vendor, the team also migrated from Selenium to Cypress.

Paired with Cucumber, another framework adopted by the team, the solution allows developers to test browsers from their local environment. The capability is made possible with Perfecto Connect, a feature that creates a secure bridge from a local developer environment to the Perfecto cloud desktop web browser virtual machines (VMs). With it, they can execute new builds at scale with Cypress & Jenkins.

After a few minutes of setup and configuration, the Gliffy team was able to start testing with Cypress.

The Perfecto Cypress SDK, like the open & integrated Perfecto platform, is completely agnostic. The team quickly implemented the solution within their existing environments and processes — right out of the box.

After executing across browsers with Perfecto, the team can quickly see where, when, and on what browser their tests passed or failed.

The team can troubleshoot failed tests by reviewing screenshots and video recordings, which are a click away.

Today the Gliffy team has a single solution for all the front-end testing of their web application. Because of the flexibility of the Perfecto platform, they were able to shift frameworks and switch platforms without missing a beat. Plus, with the intelligent analytics available in Perfecto, the team can quickly troubleshoot issues and debug to ensure their customers are always experiencing Gliffy at its best.

Cypress, Cucumber, and Selenium are just a few of the many integrations supported in Perfecto’s open and integrated cloud-based testing platform. Visit our demo page to explore what’s possible.