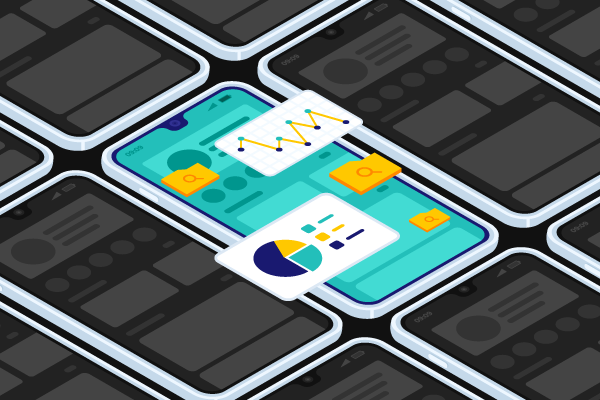 The booming digital transformation is the reason companies are investing more and more into the best mobile testing tools available. In 2021, there are almost 15 billion active mobile devices around the world with over 6 billion smartphone users. By 2025, mobile devices are expected to reach 18.22 billion, a 4.2 billion increase from 2020. It is important for companies to utilize the right mobile app testing tools to keep up with the growing demands of their customers.

This blog will review five of the top mobile testing tools, and share their benefits and drawbacks: Appium, Espresso, XCUITest, Flutter Framework, and Quantum.

Appium is an open-source test automation framework, which can be used for both Android and iOS apps. It is backed by a strong, active open-source community that provides steady support.

Automation tests for both Android and iOS can be written using the same API.

While working with Appium, testers can use Inspector to accelerate testing through the record and playback feature and produce test scripts in a number of programming languages.

Due to the remote Webdriver dependency, network issues, and processing commands of the framework are often slower than other mobile testing tools.

Unlike other widely used mobile app testing tools, Appium lacks the capability to locate images automatically. To make Appium recognize and locate images, testers have to work with screen coordinates.

Appium only supports Android 4.2 and later and it does not support older APIs for Android. To test APIs lower than version 16 developers have to integrate Appium with Selenium.

This framework is embedded into the Android IDE, which is the de-facto development environment for Android native and hybrid apps. Because of this, developers can easily set up the framework, build a test suite as a stand-alone APK, and begin testing.

Executing Espresso Android automation is fast due to its unique architecture. Espresso test automation does not require any server to communicate with and runs parallel with the app to deliver fast results (within minutes) to developers.

Espresso test automation offers an integrated method of execution so the stability of the test cycle is high. For example, there is a feature in Espresso that validates that an object or element is displayed on the screen, keeping the test execution from breaking when met with "element not detected” and other error messages.

Java and JUnit are the only programming languages Espresso supports. While this is ideal for Android developers, it is also a disadvantage as it limits your stack.

Native to UI Only

If UI needs to be tested for both iOS and Android, the tests must be written twice, doubling the work to create and maintain test scripts.

Teams working on Espresso should have experience building and launching Android apps on emulators.

XCUITest is Apple’s proprietary mobile testing automation framework for iOS. Since XCUITest is integrated right into Xcode IDE, it provides the fastest possible testing for iOS devices. Using XCUITest is quite intuitive for developers as it runs from within the XCode IDE.

As XCTest is embedded within the XCode IDE itself, creating UI tests for iOS apps becomes much simpler. It also allows teams to work on the app’s source code and test code in one place.

Due to the framework architecture, test execution against iOS devices is faster than any other UI test automation tool.

XCUITest works directly at the object level, reducing maintenance efforts that normally occur due to updates in the applications.

XCUITest is less stable when testing on real devices, which is not ideal for smoke and regression testing.

Objective C and Swift are the only languages that XCUITest supports.

Native to iOS Only

XCTest / XCUITest was designed for iOS and cannot assist a team testing both iOS and Android devices.

Flutter is Google’s free and open-source UI framework for creating native mobile applications. Released in 2017, Flutter allows developers to build mobile applications for both iOS and Android with a single codebase and programming language.

Development goes faster when the same code is used for both iOS and Android applications. Flutter’s singular codebase not only speeds up time-to-market but also cuts mobile app development costs.

Flutter app performance is equivalent to that of native real-time applications by separating UI from native controls. Unlike other frameworks, Flutter apps do not need a bridge to interact with native components.

Flutter’s “hot reload” feature allows developers to change the code on emulators, simulators, or real devices, and see results in real-time. The changed code is then reloaded immediately while the app is running. Hot reloads make building UIs, adding features, and bug fixing simpler than ever.

While Flutter offers many plugins and UI components, frameworks like Xamarin and React Native offer a larger selection since Flutter is still relatively new.

While Dart is an excellent programming language it is not popular, and developers are more likely to consider languages such as Kotlin or Java.

Some components are only available for iOS or Android, but not both, these types of components usually support Android.

Quantum is a mobile BDD testing framework designed by Perfecto. It is a great open-source, Java-based mobile testing tool for both developers and test engineers.

Quantum is intuitive, so everyone can create scenarios, including those who do not have a lot of experience in code. Tests are written in plain English, so they are simpler to maintain than ones written through code.

As a BDD testing framework, Quantum makes collaboration simpler across development, testing, and product teams, ensuring that less is lost in translation during software development.

Quantum tests are executed in the Perfecto cloud, keeping these BDD test executions stable on clean and secured Android/iOS devices and desktop browsers.

The framework can be less customizable than code-based testing with Perfecto.

Testing your mobile application has a huge impact on its performance and success. It improves the performance, capability, and quality of a mobile app while validating its core functions. Choosing the best mobile app testing tool helps you and your team identify critical errors within software.

However, a mobile testing tool is just that: a tool.

Frameworks like Appium, Espresso, XCUITest, Flutter, and Quantum are great starting points for automation, but they are not able to do everything.

Perfecto integrates with all five of these frameworks and provides the following benefits:

Want to give Perfecto a try? See what the world's only end-to-end continuous testing platform can do for you.