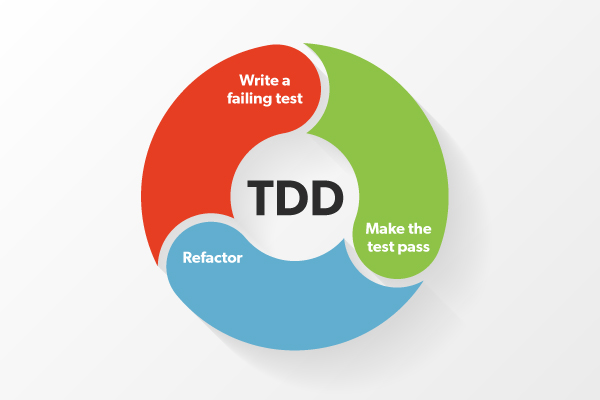 The Lowdown on Test-Driven Development

When developing web and mobile applications, simplicity is key. It can be far too easy to get yourself twisted into a pretzel throughout the software testing life cycle (STLC) by frequent testing stops and starts, having to go back and repeat tests, or duplicative and unnecessary work that bogs down efficiency. If simplicity is key, the key to simplicity is employing test-driven development.

Inefficiencies compound on each other when teams wait to test their work until after the application is complete. Too often, that practice results in having to go back and untie knots that did not need to be tied in the first place if test-driven development had been used all along. Like with any big project with multiple moving parts, frequent check-ins are vital.

What is Test-Driven Development?

TDD makes the software development process faster and more efficient, as opposed to the practice of waiting until the software is fully developed before conducting tests.

TDD focuses on simplicity — only writing code that is required to pass tests, which lends itself to a simpler and cleaner design. The practice of testing continuously throughout the software development process can be broken down into a few easy steps:

Like with any process, there are a few important do’s and don’ts when it comes to establishing test-driven development.

The most important aspect of TDD that allows it to be as effective as it is lies in the test structure. A major reason why TDD cuts down on inefficiencies is because of the nature of the test structure required of it. TDD tests are stripped to their bones to be their most simple and uncomplicated. A consistent test structure helps greatly with monitoring and maintaining the integrity of your tests.

You should hold the test code to the same standard as you do with the production code. For a test to work correctly, the code must work for both positive and negative cases, stand the test of time, and be maintainable. Your test code should continue to stay relevant during later application versions.

Avoid dependencies when creating your tests. A group of tests where results are dependent on each other can easily become fragile and complicated — a testing house of cards, so to speak. Additionally, group tests to specific functions. Rather than creating tests that assess the entire piece of software from top to bottom, create silos of tests that examine particular portions. This may result in writing more tests, but the tests themselves will be more accurate.

How TDD Relates to BDD

Much like TDD, BDD uses plain language in its testing framework to create simple tests. Since these tests are simpler, the testing objectives are clearer, and it becomes easier to keep BDD tests relevant and up to date.

Your web and mobile applications are only as good as the tests that you put them through. By waiting until the software development is complete before beginning tests, you run the risk (or near-certainty) of having to go back in the process to correct something that could have been fixed along the way. These delays can cause bloat development timing, costly inefficiencies, and a whole lot of headaches. By leveraging test-driven development within your software development process, you make life simpler for everyone.

Perfecto is the industry-trusted testing platform for web and mobile applications, and we know a thing or two about simple and effective testing. No matter the framework you are operating within, Perfecto knows how to get the most out of your app to make it 5-star quality.

Kick your testing strategy up a notch and give Perfecto a try with our 14-day free trial. We are confident you will not be disappointed.