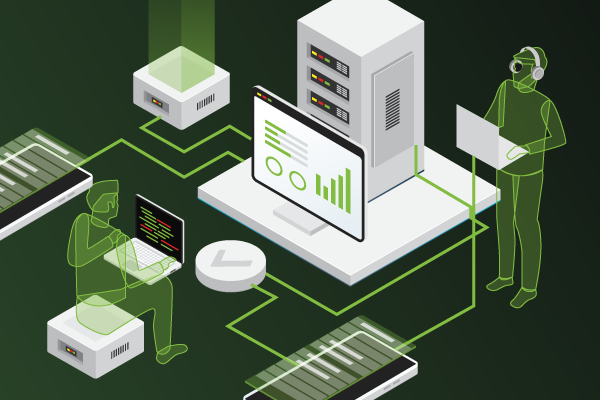 If you have been looking for a way to make your software testing accessible to all team members, you have probably come across BDD testing frameworks.

There are a variety of BDD frameworks available on the market that work with different programming languages. This article will give an overview of BDD testing, as well as some of the more popular frameworks for your team to consider.

Most BDD tests are written in a business-readable programming language called Gherkin, which describes business behavior without going into detail of how it is implemented. Those frameworks that do not use Gherkin use non-Gherkin domain-specific languages (DSLs) that have BDD-like features.

Gherkin is broken down into a Given-When-Then language construct:

By using this breakdown, Gherkin scripts connect the human concept of cause and effect to the input/process/output concept found in software development and testing. In addition to mirroring natural business and user processes, Gherkin is also based on TreeTop Grammar, which exists in over 35 languages. Therefore, users can write Gherkin test scenarios in plain English.

This article has already mentioned a few major advantages to BDD testing, such as its business-focused perspective, the simplicity of writing Gherkin tests in simple English, and its resultant ability to help increase collaboration across teams.

Other important advantages of BDD testing include:

Just like any other instance when you are looking to invest in a new tool, choosing the best BDD framework depends most on your organization’s specific requirements. Yet, there are many BDD frameworks out that can best support your application or how your team operates.

Here are some of the most popular BDD testing frameworks that should be on your radar.

Cucumber is one of the most popular BDD testing frameworks on the market. Originally written in the Ruby programming language, Cucumber now supports a variety of different programming languages, including Java and JavaScript. Cucumber is still particularly popular within the Ruby developer community since many are already familiar with the framework and do not need to learn a new tool for BDD.

Some organizations implement Cucumber within a Selenium framework to allow for reliable test automation that emphasizes plain language. This allows for:

Quantum is an open-source, Java-based BDD testing framework designed by Perfecto. For organizations looking to expand their automation efforts, Perfecto’s built-in Quantum integration is a great BDD option for both developers and test engineers.

Quantum BDD automated tests are executed in the Perfecto cloud, keeping these executions stable on clean and secured Android/iOS devices and desktop browsers. Users can also enjoy all the common features of Cucumber BDD, such as data tables, scenario outlines, examples, and backgrounds.

SpecFlow is of the most in-demand .NET BDD frameworks. There are two versions of SpecFlow: open-source and premium, known as SpecFlow+. The free and open-source version requires a separate unit test runner, such as MSTest or Unit, to execute test scenarios, while SpecFlow+ comes with a runner suitable for BDD testing included. The premium version of SpecFlow also includes other features, such as Microsoft Excel integrations, living documentation, and premium support.

JBehave is a leading BDD framework for Java and other JVM languages, such as Groovy, Kotlin, and Scala. Also known as one of the original BDD frameworks, JBehave is especially well-known among developers and test engineers alike.

While it offers some very useful features such as composite steps and the parameter injections for parameterizing tests, it is also important to note that JBehave does not offer some common Gherkin features. Teams looking for a Java or JVM-language BDD framework that is fully compliant often add Cucumber-JVM to their list of considerations.

Codecpetion is a popular framework for PHP. While inspired by BDD, Codeception is a full-stack testing framework that also does unit testing, API testing, and functional testing, in addition to BDD testing.

Teams looking for a more flexible type of developer-focused testing framework are typically more attracted to Codeception over other frameworks.

Take advantage of all the benefits of behavior-driven development (BDD) with Perfecto. Improve speed and quality at scale with a solution that lets teams quickly translate BDD requirements written in Gherkin into functional test steps for anyone to understand, automate, and troubleshoot.

BDD testing is a great way to shift your testing left, and provide greater transparency across your organization, from team members to stakeholders. Regardless of which programming language your developers or test engineers prefer, there is BDD framework for you.

Perfecto supports a wide range of BDD frameworks, enabling teams to improve speed and quality at scale. Combined with other integrations across the entire DevOps toolchain, Perfecto makes application testing a swift and streamlined process.

See how Perfecto boosts quality and velocity with BDD.