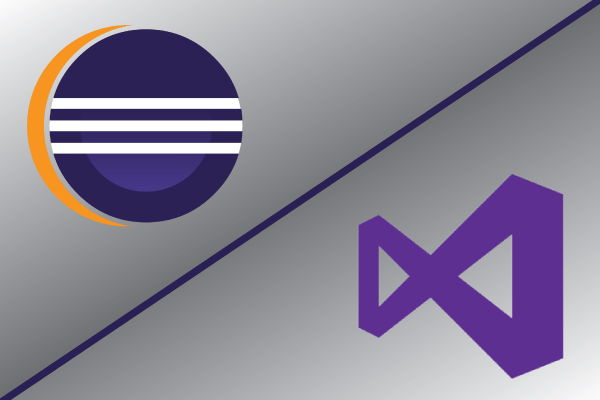 Eclipse vs. Visual Studio — which IDE should you choose? The answer depends on your intended use.

Both solutions have their advantages and disadvantages but you should pick the one that fits the job best. Think of a builder’s toolbox. You can pick the right tool for the job, by selecting the tool that helps get the job done in the most efficient manner possible.

First, let's look at each tool and some high level comparisons.

Visual Studio is a very mature development IDE that has been around for a long time and has everything you could need and more. Visual Studio supports a wide array of languages like Visual Basic, C#, F#, C++, Python, Java, JavaScript/TypeScript, and more.

The types of projects that Visual Studio supports and the templates available make it very attractive as an IDE for teams big and small. Visual Studio provides various editions, depending on your needs and budget, so small teams can get access to the free community edition.

The Visual Studio 2019 editions comparison is available here with a breakdown of the differences for each edition. For testers, you really must look at the enterprise edition to get access to some of the testing-specific features.

Eclipse from the Eclipse Foundation

The Eclipse IDE is famous for its Java Integrated Development Environment (IDE) but it has evolved to include C/C++, JavaScript/TypeScript, PHP, and more. Eclipse is open source and therefore teams and individuals can get access to this IDE at no charge.

For enterprise teams looking for features that can help improve productivity, there is an option. MyEclipse provides enhanced capabilities found in Visual Studio Enterprise. These include database design and persistence capabilities as well as many more.

High-Level Features of the Eclipse IDE

What About VS Code and Eclipse Theia?

VS Code maybe the most popular code editor at the moment if you look at recent surveys. The Eclipse foundation also started a project as an open source alternative called Theia. Both of these editors are free and the VS Code source code is available under the MIT license.

Which IDE Is Best for Testing?

When it comes to testing, both IDEs we covered integrate well with testing tools — including Perfecto.

So, the answer depends on the type of projects you work on, personal preference, and more importantly which IDE will help you get the job done faster. Ultimately, that is up to the individual user.

Although I have my favorite IDE that I prefer to use, the choice is yours. You have solid, mature, and well supported options to choose from.

The good news is that if you are focusing on test creation and test execution for your projects, both Visual Studio and Eclipse are well supported. And, both work well with cloud-based solutions like Perfecto.

The State of Test Automation

What's challenging teams in test automation today? Go beyond IDEs and testing and get the knowledge you need to move your business forward. Get the latest state of test automation report from Perfecto.

You'll be able to execute Appium and Selenium scripts simultaneously from Visual Studio without leaving your session.

More about the integration >>

Perfecto integrates with Eclipse seamlessly. You won't need any plugins.

This means you can execute Appium and Selenium scripts while working on a device in the Perfecto cloud — without leaving your Eclipse session.

More about the integration >>

Try pairing either Visual Studio or Eclipse with Perfecto. Perfecto makes it easy to debug your web and mobile apps.

Simply connect to a device in the cloud like you’re connecting via USB and debug apps straight from your IDE. There’s no need to spend time trying to recreate the bug. Perfecto makes it fast and simple to find and fix bugs.

See for yourself. Start your two-week Perfecto free trial today.

Visual Studio is an IDE with all the features needed for development. Visual Studio Code is a lightweight source code editor.

There is a basic community version which is free. However, there is also a paid version with more features available.

Can You Use Java With Visual Studio?

Java was supported in the past, but now JavaScript is cited as a first-class language in Visual Studio. You can also use built-in languages such as C, C++, and C#.

What Is the Best IDE for Python?

PyCharm is an IDE fully dedicated to Python. There’s also Spyder and Thonny, two more IDEs that are best for Python.

Nico Krüger is the Director of Global Sales Engineering. He specializes in technical guidance and product development efficiency for global organizations. An expert in software development, he is dedicated to helping customers drive quality product strategy.