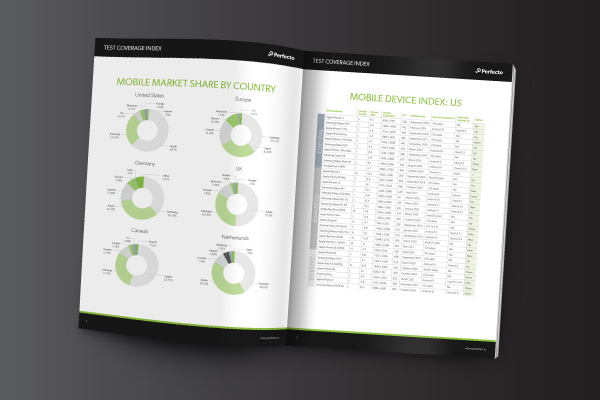 Optimizing Your 2021 Test Coverage: Digital Trends to Keep in Mind

Perfecto’s Summer 2021 Test Coverage Guide is here! Inside its pages you will find all the data you need to optimize your test coverage for the rest of the year.

While perusing the devices, browsers, and operating systems mentioned in the guide, you should also consider the following trends that are impacting the mobile, web, and desktop application digital landscape.

Let’s delve further into how these trends are making an impact. DevOps teams must prepare for both the opportunities and challenges that these trends present in order to test as optimally as possible.

The Role of Virtual Devices

DevOps teams still face various mobile testing challenges. Dev teams are under pressure to help increase velocity and shrink down their TTM (time to market). These optimization efforts happen across every aspect of the mobile app development and testing process, such as new features, bug fixes, and support of new technologies.

Because virtual devices are so economical, teams can easily scale parallel testing and reduce the overall time to perform sanity, regression, unit, and other types of testing.

Yet virtual devices also have their limits. While these platforms drive fast feedback and scale while keeping the budget to a minimum, it is strongly recommended to leverage these platforms in the early dev and test stages ONLY (including test creation activities). After the feature-complete phase, testing activities should happen solely on real devices.

Combining real and virtual devices this way will ensure:

The following table nicely summarizes the main differences between an Android virtual device (emulator) and an iOS virtual device (simulator). It also emphasizes the importance of testing on real devices later in the cycle, due to material differences and the limitations of testing solely on virtual platforms. 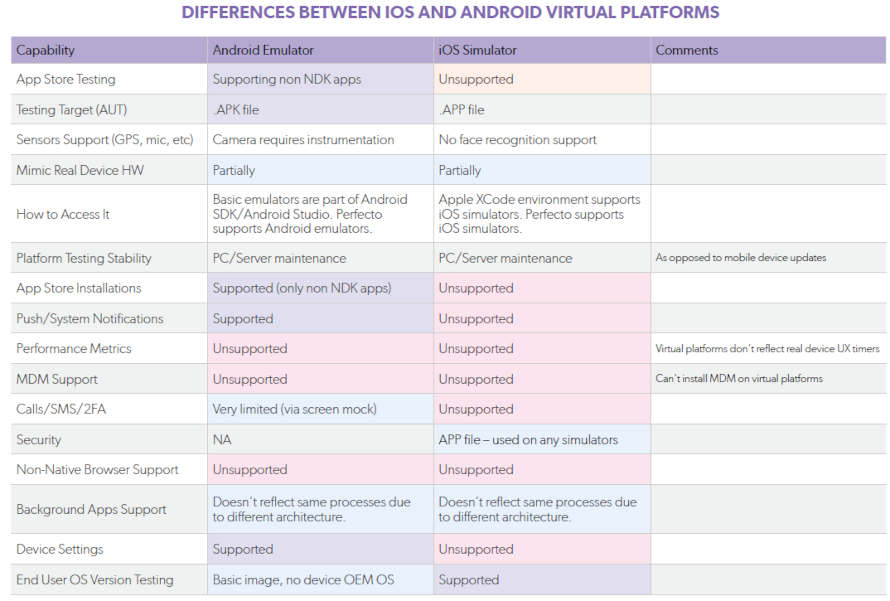 For a more in-depth look at incorporating real and virtual devices into your mobile testing, Perfecto’s recent eBook offers many insights on this topic.

Google’s Android 12 technology is well on its way. With an expected release date in the fall, Google is primed to introduce significant changes to the Android platform, as well as new capabilities for Android developers to leverage. Google has been working with the major Android device OEMs to build this new version, including Oppo, Vivo, ZTE, Asus, OnePlus, and others.

The platform beta is already available for most Google Pixel devices for developers to get a first impression. Testers are also using the beta version to assess its impact on their existing Google Play apps.

Android 12 features many changes, including widget improvements, notifications, security and privacy enhancements, enriched image support (including new AVIF file format support), and many new APIs. Additionally, a new Restricted bucket that has massive restrictions and lower priority compared to apps that are in Active mode will be managed by the Android system.

Both developers and test engineers should take advantage of Android 12’s beta phase and start exploring. Now is the best time to understand the challenges and opportunities Android 12 will present to those looking to enhance their existing mobile apps. 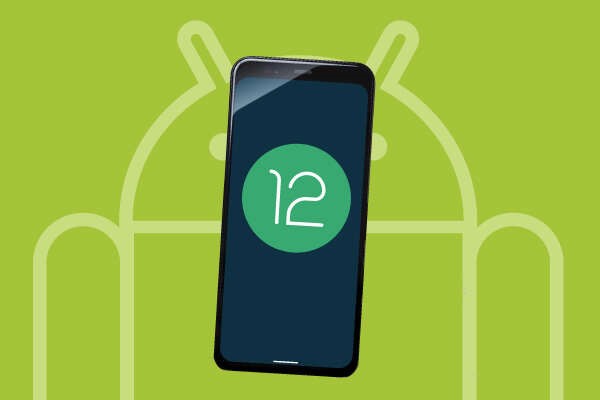 Similarly, Apple is unveiling its new major iOS and iPadOS release later this year. iOS 15 will come with a whole new set of smartphones (including the iPhone 13 series) and has multiple changes that is supposed to add to the existing complexity of iOS and iPadOS apps.

It is expected that only iPhones 7 and above will be eligible for an iOS 15 update. Some new platform features to look forward to include:

As was recommended for Android 12, developers and testers should start exploring the initial dev preview followed by the beta versions of iOS 15 as soon as possible, either on iOS Simulators or real devices. Trying iOS 15 out now will help users understand the app functionality, performance, security, and other important features. 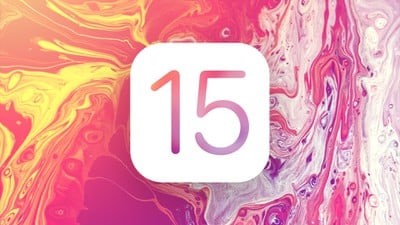 In most mobile dev and test strategies, functionality and UX are top of mind. Yet non-functional aspects of mobile apps should make an appearance as well.

Accessibility is becoming a mandatory compliance across geographies, making it a growing focus for enterprises. Security is another key aspect of mobile app quality and market success.

The DevSecOps methodology recommends shifting security coverage, testing, and software design left so feedback is being absorbed as quickly as possible.

As the following visual suggests, there is a growing trend of security vulnerabilities in the mobile space. These vulnerabilities have caused over 70% of mobile apps leaking personal data and violating security regulations like GDPR and others. 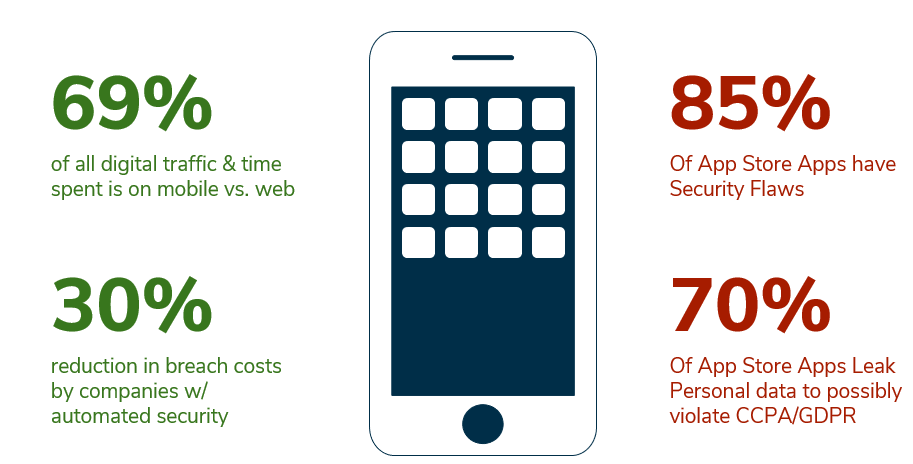 Embracing the DevSecOps strategy of shifting security testing left helps teams safely release more apps and avoid the brand and business damage of a security flaw. Ways to shift left from a security perspective include increased automation, adherence to industry standards like OWASP, CWE, CVE, NIAP, and practicing SAST/DAST/IAST on the app binaries and the code itself.

2021 continues to provide opportunities for optimizing your test coverage. Virtual devices, the upcoming iOS 15 and Android 12 releases, and mobile app security are a welcome addition to existing technologies that not only work well, but also offer a much better end user experience and higher quality product. Explore these trends, and start making decisions on how to adopt and benefit from them through 2021 and beyond.

Get Your Summer 2021 Test Coverage Guide