Foldable smartphones are here. They’re hitting the market, and soon they’ll be in the pockets of consumers. These new devices offer highly coveted screen space for consumers without sacrificing the convenience of portability.

With the emergence of these new devices, how can DevOps teams prepare their apps? Learn all about testing foldable phones and how to optimize your app’s performance.

Learn the top takeaways from our recent webinar, Everything You Need to Know About Testing Foldable Phones. Keep reading to learn more.

7 Things You Need to Know About Testing Foldable Phones

1. Foldables Are Here, But the Community is Split

The first wave of foldable phones is here. They've already been announced, including:

The first wave includes four major OEMs or device manufacturers. So, this is definitely not a trend or a gimmick. This is a technology that is set to become popular. Will this be a niche thing? I don’t think so.

People thought the same about face recognition technology, so I would not underestimate this new technology. We have seen kind of a stagnation in the market, a frozen period of two or three years. During that time, we didn't really see that much groundbreaking innovation from a smart phone perspective.

As with any new technology, there will be growing pains. We should acknowledge them. And we should also start preparing.

Even with these foldable phones hitting the market, the industry is still split about how this will change DevOps. During the webinar, we posed this question:

Do you think that foldable devices will disrupt quality of existing apps?

As you can see, the results are all over the place.

But keep in mind that even if the penetration of these devices is going to be small in the beginning, it's still something that needs to be supported if you are a large enterprise. It doesn't matter if you have 100 devices or 100 users, or 1,000 users. You need to have a seamless user experience and you need to support these devices.

Why is it important to begin preparing your apps?

If someone is about to pay this amount of money for a new device, which is a mix of cell phone and tablet all in one, they obviously expect a lot. They need a smooth user experience, great performance, and full support for all of the common apps that they used in previous smart phone generations.

The expectations are high — so apps on foldable phones need to be prepared to perform.

When we say app continuity, it's exactly as it reads. It's the ability to have a fluent, flawless experience when you're running a smartphone and unfolding the device to a tablet mode.

From a user perspective, you should not lose any of your existing session. So, if you were navigating through a map app, you would expect not to lose any of the content when unfolding the phone. But also, you are going to want to get this extended view with more information. App continuity needs to be as smooth as possible on the foldable smartphones.

Compliance compatibility is a huge and very important difference that will impact:

So, you will have here a nice permutation, or a set of permutations, that you need to cover as part of your test plan from a user perspective, UI, and layout. And it's not just for your Android native applications.

5. Multi-Window Needs to Be Continuously Tested

With multi-window split view, you have the ability to open an application, or a few applications. You can have an app in the upper level of your screen, and on the lower part of the screen, you will have the second app. Any Android Nougat, up until Android below P, supports split view.

Regardless of the foldable devices, this is something that you need to be aware of, and you need to test. You need to ensure that your app works fine in a split view mode.

That's the different ways of using split view. You can do some floating. You can move around your application screen on the device itself. But it’s the split view term that you need to know about.

With freeform, or the open pop-up view, there is a different way. This is when you can actually play with the app in a floating manner on the screen. You can move it around, resize it, and use it any way you like. Again, here you need to make sure that it works fine on Android N and above.

This is a supported feature from Android N and above. So, you need to make sure that the app works fine around this functionality. It’s something you need to keep in mind and continuously test.

6. Multi-Resume Will be a BIG Change 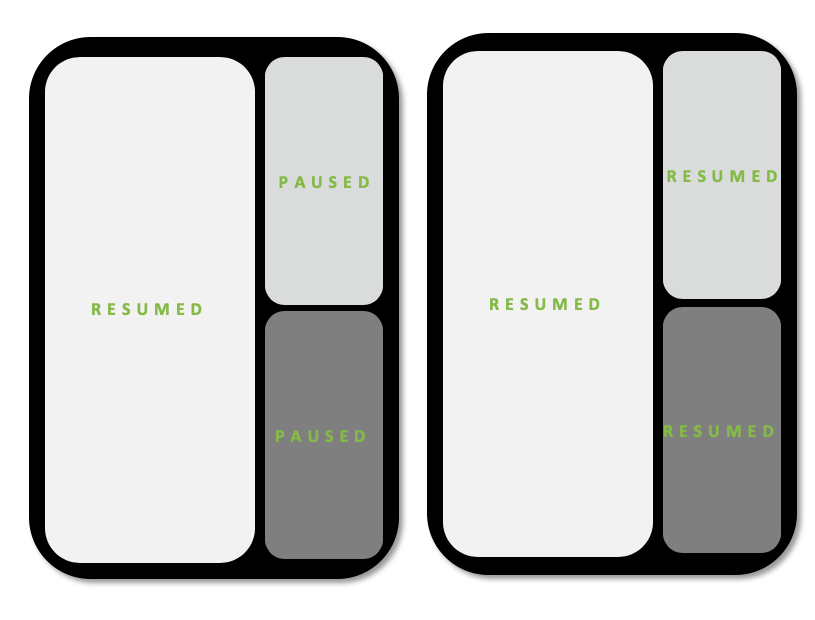 For Android P and above, this is a new feature that is called multi-resume. Multi-resume is a major change.

Let's say that this paused application is a YouTube video that you are playing. When you move to the foreground and you use another app, the YouTube video pauses. You won't see a continuity of the streaming video. Same goes for the second app.

From a manifest perspective, you can configure, allow multiple resumed activities, and make it as a tool. Android Q is going to make it a mandatory flag for developers.

This is a huge development. You will see three applications running in parallel, consuming services, using the sensors, and everything that you can think of from an Android operating system perspective. This is a huge change for foldable smartphones, and again, supported from Android Pie and above.

Another key feature to test on folding smartphones will be the main and cover displays. The cover display is the typical smartphone display. This is the smaller screen. In the case of the Samsung phone, it is 4.6 inches. When it's unfolded, it is 7.3 inches.

So, what does it mean? It means that you need to think outside of the box from an input method perspective and also web, not just native.

What do I mean by input methods? Consider this example. When you are starting to type in a keyboard on a cover display, you need to be able to continue typing seamlessly when you unfold the device. This needs to happen from the moment you leave the cover display and switch to the main one.

You have some UI constraints here that you need to take into account. Obviously all the native apps today have input methods. But think about usernames and passwords, typing addresses, and other inputs within the app.

That's an important engagement method that you want to test across these different UIs or layouts on the foldable devices.

You also need to think about the look and feel of your responsive and progressive web applications.

So, responsive and progressive web, by definition, work on smartphones, tablets, and desktop browsers. Nothing changes here. But you need to have the ability, and you need to do the testing, on this foldable device — especially when you are dealing with responsive.

That’s because when you're using responsive web on the smartphone and unfolding it, this is a different kind of a new technology. It requires a new method of engagement that I'm sure no one actually ran into in the past from a web perspective. So, you have a new use case here for testing of responsive and progressive web apps around foldables. Keep that in mind.

Foldable phones will soon be in the hands of consumers. While this is an exciting development, it also poses many challenges for DevOps teams. Are your apps ready for foldable devices?

We’re just scratching the surface of foldable phones in this article. Learn even more about testing foldable phones, including specific test cases and scenarios to consider and a recommended test plan.

Check out our on-demand webinar: Everything You Need to Know About Testing Foldable Phones for more.