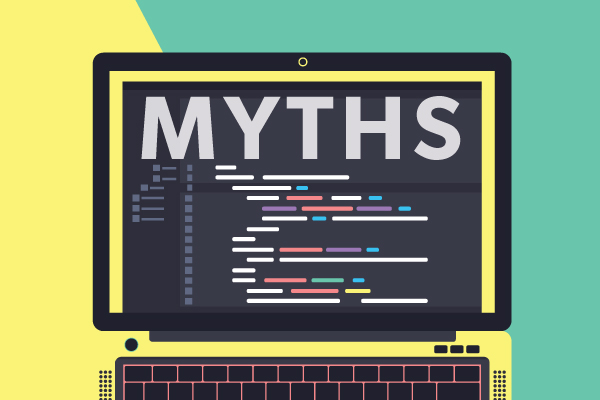 So, what’s the hype? Let’s learn more about scriptless automation testing, how it works, and some common misconceptions that keep other testing teams from getting on board.

What Is Scriptless Automation?

According to Gartner, “scriptless testing tools reduce or eliminate the amount of scripting involved in the creation of tests using model-, object-, data- or keyword-driven approaches.”

Also referred to as codeless test automation, scriptless testing simplifies the testing process dramatically by allowing anyone to create a test visually based on any type of business logic that needs validation. These human steps are then translated to execution code behind the scenes, making software testing highly accessible regardless of coding experience.

There are those testing professionals out there that think scriptless automation is too good to be true. Buying into common misconceptions about this technology, these individuals consider scriptless testing a fleeting trend at best, and potentially harmful to their testing environment at worst.

Let's delve into some of the more popular myths out there regarding scriptless automation:

While scriptless automation is an exciting step forward for software testing, some naysayers believe that these tools are merely recorders (also known as record-and-playback tools) dressed up in fancy clothing. Testers would still need to deal with the various issues that recorders present, most notably the need to re-record every scenario after each minor change.

This claim misses the mark completely.

Tools like Perfecto Scriptless build tests as models, made up of reusable test steps. These allow testers to build complex scenarios more quickly and easily. Instead of individual recordings, testers can update or revise these test steps in real-time. Furthermore, any change made to a test step will apply automatically to all other scenarios that use that step.

Another popular myth surrounding scriptless automation is that it is unreliable when compared to scripted testing. For those who buy into this myth, scriptless testing will not actually resolve test flakiness. Therefore, any efforts to scale testing will ultimately be fruitless.

Many test automation tools with scriptless options actually offer “intelligent scriptless automation,” which harnesses the power of AI to identify test elements or objects both quickly and accurately. This allows test flows to update automatically without any human intervention, as long as the changes don’t impact the tests’ logic.

Web applications often go through many UI-related changes on a regular basis. For scripted solutions, this means countless hours of going into the test code, finding the issue, and fixing it, only to have it break later after the next small change.

Myth #3: It Is Difficult to Get Started

Even for those who may understand the benefits of scriptless automation, setting up yet another tool in your testing environment can feel daunting. First, setting up the tool itself can feel like a challenge. Second, there is always the consideration of how a scriptless testing tool will fit in the rest of the team’s tech stack.

Cloud-based tools make getting started with scriptless automation much easier. With Perfecto Scriptless, there is no need to get developers involved with setting up a testing framework or anything else to get started. You simply log into your account and start creating tests.

Additionally, most scriptless automation tools integrate with a wide range of tools commonly used in testing environments, from CI/CD tools to messaging apps. Perfecto Scriptless integrates with tools such as JIRA, Jenkins, Slack, TeamCity, and more, while allowing testers to share results with developers, product managers, and other team members.

As companies strive continuously to maintain their competitive edge, they need tools that will empower their teams to build high-quality applications fast. Scriptless automation is an important part of addressing this challenge.

Scriptless automation testing not only simplifies test creation, but it also makes these tests more reliable and scalable. In addition, the visual presentation of scriptless automation makes software testing much more accessible to team members that have less coding experience. This accessibility has other applications as well, such as offering a simple way to offer managers more insight into the company’s software testing efforts.

Furthermore, its ability to integrate easily with other software testing tools makes it easy to started testing with scriptless automation right away.